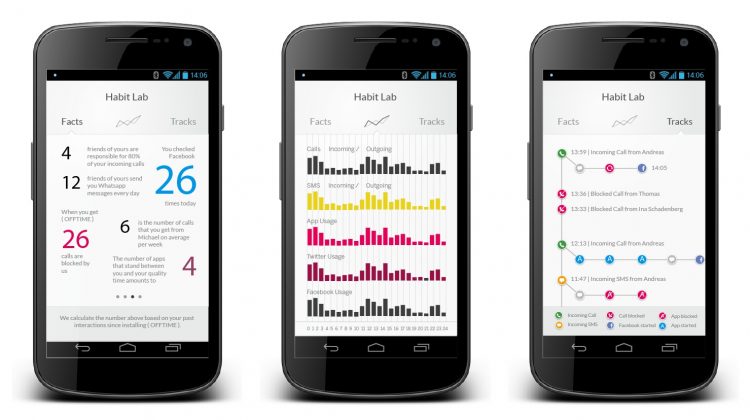 Ever since FastCompany wrote about their experiments to get off the grid for a while, #unplug has become the term for a reverse-trend to the digital. People from all over the web started writing about their own experiences with taking time off of internet and social media. Stories about ways to beat your digital addiction pop up daily now (e.g. A Trip to Camp to Break a Tech Addiction). However, we have to move beyond this discussion and find a way in between. ( OFFTIME ), a post-tech start-up from Berlin who is active in this field, next to promoting the discourse, are developing an app for which they also run a crowd funding campaign at the moment.

Get rid of everything: #unplug

People are fascinated by the idea to escape their digital lives for a while because of two aspects: (1) they experience relief and (2) they grasp that it’s a very difficult task – it almost seems impossible to really switch off in our more and more connected and technologized world. In this process, we tend to move to extreme solutions and overreact.

It might be worth to write a blog post on why it is so difficult to disconnect from a psychological perspective. Or why we might be so depending on technology. Arguably. However, from my view it makes sense to have a more pragmatic view on things.

At work and during our free time – Focus and relax

Common literature on how to relax and unwind: a huge pile of things to read, to learn and (when you google you get) 50-things-to-relax-lists to work through like a todo lists. But that’s too much again for most of us to process again. At the end we want just relax, not work even more to reach it.

On the other side, most tips on how to focus ends after the part that you should prioritize things and that you should bring the less important and urgent things out of your sight. With turning off notifications, what more and more people realise and do, the first step is done. However, this works only until we have a tired or weak second and off we go… we seek information and stimulus ourselves, at least that what I see with myself.

Beyond a Digital Dualism

But let us look beyond a pure Digital Dualism and the belief that on and offline are largely separate and distinct realities and can be divided into two overarching categories. That we have to #unplug (for weeks) to get back to reality again. Neither, the other extreme, that we have to transcendent completely into a cyborg and have technological parts implanted into us.

The question is how can we combine the technological benefits and also the offline, when we are at work, but also in our free time. We have reached a lot, we have the world’s knowledge at our fingertips whenever we want it. However, during a romantic evening or while relaxing and recharging our batteries, this gigantic info bubble isn’t exactly what we need.

( OFFTIME ) will make it easier to focus, but also to unwind

Alexander from ( OFFTIME ), who currently does a crowd funding campaign for his startup refers to that with the analogy of food: “the last 50 years we have seen a rapid growth of the food available to us. In the last 10 years we realised that we have to be careful of all the sugar and fat things, the junk food, around. The information available grew exponentially during the last 20 years, now we have to see how we consume information. Too much junk information isn’t good for us either.”

In line with this, they develop their solutions; or as they state “with  ‘OFFTIME’ you are the one to decide what is important right now: Keep out all apps, phone calls and text messages that distract you and go back to concentrating on your work, a chat with a friend or simply a moment of peace and quiet. ‘OFFTIME’ will look after everything else. That way you can be more efficient or recharge the batteries properly.”

The Quantified Self aspects of ( OFFTIME )

One of the key functions, after discussions with the QS community and which they are still testing internally, is the Habit Lab. In the Habit Lab you can make visible and reflect on your unconscious habits. This way you see when most people call you, when you lose most time with checking news or emails and you can support you in the usage you would like to achieve.  We track everything around us, but this–the tracking device itself–seems to be a blind spot up to now. 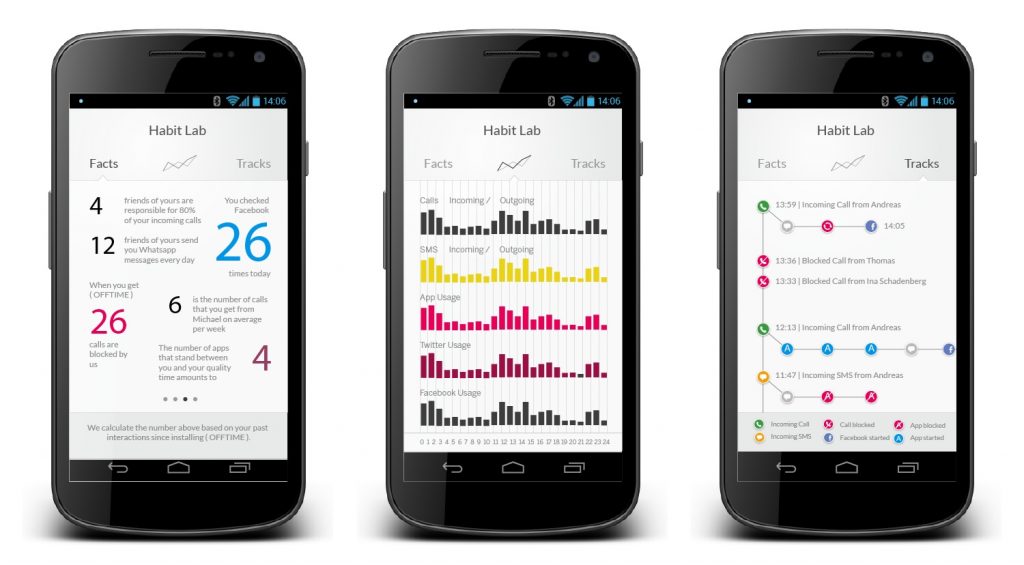 Support their crowd funding campaign and get ( OFFTIME ) first

Until Friday, July 25th, you join them and support their crowd funding campaign on the leading German platform StartNext. They try to raise at least 25.000,- Euro to finish their product and to prove that there are customers willing to pay (and that they can build a sustainable business with this). If you would like to have early access, become part of their closed Beta, or support them in any other way, go ahead to offtime.co/startnext.

Disclosure: Alexander Steinhart, CEO of Offtime is a friend of mine.